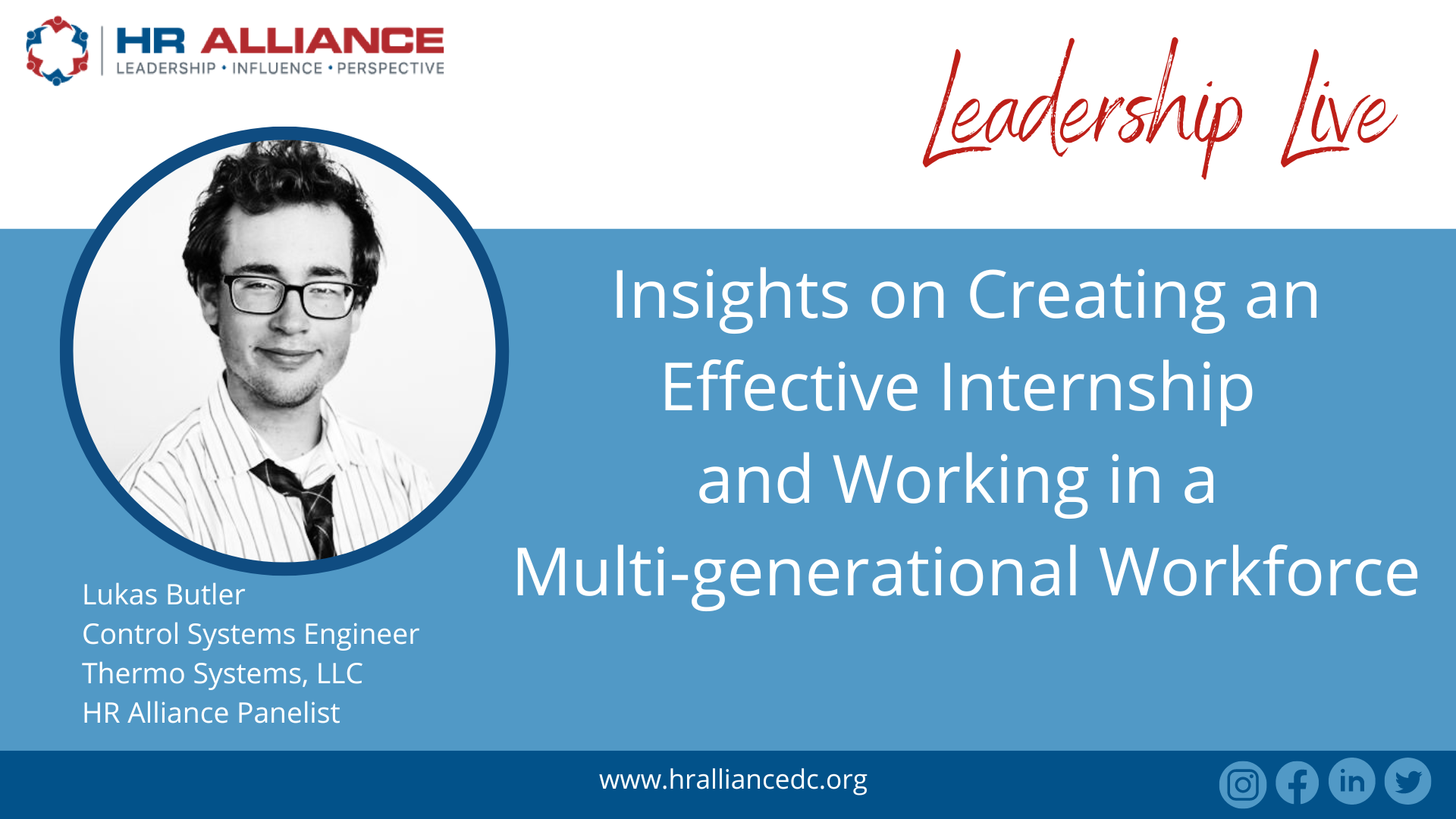 What was your first internship like and what did you learn?
Hi, my name is Lukas Butler. I am a Control Systems Engineer, and I work for Thermo Systems, LLC in Reston, Virginia. My first formal internship was a really good introduction to corporate culture because when I first started, I got to do an onboarding with new hires, as well as other interns. And I got to run through the entire process and see all of the different HR processes that the company had as well as, you know, all how everything works with the payroll and insurance, etc.

What type of projects did you work on in your internship?
Throughout my internship, I would say that 90% of the time worked on real projects, with all the teams that I got to interact with. And I would say that what would define my internship the most is I really got to sink my teeth into real work and didn't just do assignments that my supervisors made up for me. I really liked how they would introduce me to projects because on every project I would start on, they would say, okay, first of all, read this document.

How did your Leadership Team support you as an intern?
There's always a standard document that goes over the scope of the project and all of the different moving parts within it. So that's a really nice start, and they would just say, take the day, or at least take before lunch, just read this document, really understand what you're working on, and I'm not going to breathe down your neck on finishing that, but I just want you to understand. Then they would start to give me a small part of it, whether it was just like something with a spreadsheet or something like that. And then they would eventually build me up to bigger things.

What was one of the most interesting projects you worked on during your internship?
The biggest thing that I worked on was I was designing a graphical view of a big industrial air conditioning system. They actually allowed me to design a graphical view for two different levels of a data center completely by myself, of course, using the standards that the company provided to me and the examples they provided to me, but they allowed me to do that. They actually had me put it onto the live system, and they had the subcontractor that was working with us, verify my design. They sat down next to me in the control room and with my supervisor president, but he was kind of, you know, sitting in the back and letting me interact with the subcontractor and really run through it as if it was my own thing. I would say that was the hardest I worked during the internship. I really appreciated that because it put a lot of trust in me as just an intern. They made sure to tell subcontracts I was an intern. “This is his first time doing something like this,” they would say. They still allowed me to go through with a real, what they call commissioning of these graphical displays. And that was what my first five weeks were like.

What was your next rotation like in the internship program?
In my second five weeks, I was shadowing people on sites. I did a little bit of work, but most of it was just learning. I got to watch coworkers run through different checklists on different sites because that was the team that I was following. Their scope of work was servicing different sites. I got the best of both worlds where I got to do a lot of observing, learning, and shadowing, but also got to work on big picture projects and got to see them put an action.

Did you interact with interns during the ten-week program?
The only time I interacted with the other interns was during the onboarding process because they had all the interns fly into the central office, which is the New Jersey. They had us do onboarding together, and we had some team-building activities that we did as well. We even had a barbecue at the end of it. So I got three days with them, and afterward, we had two-week check-ins on Teams. And the reason why we did that is that there was only one intern for each office. There are several offices all throughout the country that our company works at and would be able to interact through that. And I did form friendships with some of the other interns and would talk to them over teams and that kind of stuff. But the only times I interacted with them in person was during the onboarding process.

How were interns recognized during the internship program?
There are several different ways in which interns were recognized, ranging from very formal to pretty informal. My supervisor, first of all, was very quick to praise me and, you know, tell other coworkers within the office. Hey, Lukas did this by the way. It was pretty great. They would also be sure to tell the media team within the company, and they would release a Friday Roundup every week. They always made sure to include intern achievements within this Friday Roundup. Then during these two-week checkups that I've talked about, the supervisors would often join as well, and they would recognize some things the interns did, or they would directly tell the intern coordinator in the intern coordinator would be like, “Hey, I heard from Albert this week that Lukas commissioned this really great graphical display. I'd love to tell you more about it.”

What happened towards the end of the internship and beyond?
I had an exit interview at the end of my internship. I had two supervisors throughout the summer, one for the first five at five weeks, and one for the next five weeks. And so I had my exit interview with the second supervisor, which was pretty informal. We had a sit-down dinner at a local restaurant, and he ran through some pretty standard exit interview questions with me. And he just wanted to know about my experience. Once we were done with the exit interview, he let me know that they were very impressed with my work and that they would likely have an offer for me in the works and to keep an eye out. I give them my personal email, which was how they contacted me.

In the intervening times, both supervisors also gave me their phone numbers. I was able to interact with them in that way. I was very interested in some of the projects they were wrapping up, so I was still able to interact with them. The offer letter came sometime in November of 2021, before which one of my supervisors called me to let me know that they'd be giving me an offer. And I had a very short and very informal interview at the offices. And that was that.

What would you tell students to keep in mind for a successful internship?
I have two major things. The first major thing is a more positive thing, which is to try to learn as much as you can. You should ask as many questions as you can. Never just have a thought pop into your head and then think, I'll probably figure that out eventually. You should always just ask, and your supervisors will be very happy to answer your questions. They will be happy that you're asking questions and trying to do as much as you can during your internship. Ask about different projects you can work on, and try not to just settle with the work that you're initially given.

Then the other big thing is to maintain a level of professionalism when you're interacting with your coworkers and your supervisors. A casual work environment is fantastic. And having coworkers that can joke around with and have a good time with is great there, but there's a line, and you need to make sure that you're not saying too many things about your personal life that might make other people in the office uncomfortable. Make sure you always know who you're talking to in terms of supervisors or managers and the people above them on the management team. Even if they're joking around with you and you're having a good time, choose your words carefully.
“Just remember that everything you say during an internship is a big long first impression.”

Was there a multi-generational "ah ha" moment insight during your internship?
My biggest aha moment was that there are different ways that people do things, and it is not necessarily based on age. It can also be based on upbringing as well. I found that there could be a younger coworker who found it very important to have a flexible work schedule as long as they got their work done and did their eight hours every day. That was the most important thing,

What is the biggest misperception people have about Gen Z?
I think the biggest misconception about Gen Z is work ethic and loyalty. I think that my generation definitely has, a more collective idea about being very fiercely independent in the workplace and are very quick to tell somebody if they're not getting what they need. I think that that can be misconstrued sometimes as not being loyal to the company that they're working for, and therefore not being concerned about the company's bottom line. I very much believe that my generation, as long as it's getting what it needs in the world and the workforce, are definitely hard workers, passionate, and bring really unique ideas to the workplace.

What do you think matters most to Gen Z in the work environment?
I think what matters most to Gen Z is a work environment where they can feel comfortable. What that boils down to is flexibility. I think flexibility is the biggest thing and then making sure that they're properly compensated for the work that they're doing. I think that that's the most inflammatory part of the thing when it comes to clashing with other generations is that Gen Z tends to hop jobs very quickly if they're not getting compensated correctly.

I think it's flexibility and compensation and also a little more individuality. I think my generation also likes to express itself in the workplace, whether it comes to, attire or decorating their cubicle, or anything that makes them make somebody unique and maybe a little bit different from the rest of the workforce.

What is exciting about the upcoming "Managing a Multi-Generational Workforce" Panel?
I'm excited about the panel. There is a really great representation of different industries and every different generation on the panel. The individuals that you're going to be talking with are fantastic and multifaceted people. They have a host of different ideas about leadership and the work environment and all of the different questions that we're going to cover during our panel. I think that coming to the panel will be a fantastic experience because you'll get to interact with all these different multi-generational members, as well as maybe break some stereotypes that you might have about different generations. I think it's just going to be a great experience in that regard.

There have been no comments made on this article. Why not be the first and add your own comment using the form below.